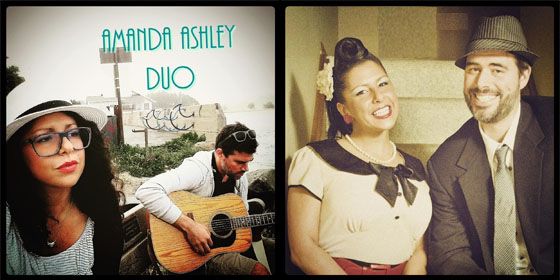 Amanda Ashley is a New York based singer / songwriter originally from Long Island.  She began playing the piano, guitar, and violin at an early age.  Her parents became aware of her musical talents early on and influenced her to pursue her aspirations in music.  Among her influences are Elton John, Billy Joel, Mary J. Blige, Madonna, Mariah Carey, Ella Fitzgerald, Fiona Apple, and Alicia Keys.  She began writing and composing at the early age of fourteen and started performing solo by the age of sixteen.  While attending Fredonia State University in upstate NY, she continued to write and perform both on and off campus.  Amanda graduated from Fredonia with a Bachelors degree in painting and drawing in May 2007.
Currently, Amanda is pursuing her musical aspirations while performing throughout the Northeast.  She continues to captivate audiences by combining her original music with covers ranging from Billboard Top 40, Classic Rock, & Pop to 80's, R&B, and Soul.  Her unique sound is a contemporary mixture of R&B, Jazz, and Pop.

Amanda Ashley Duo Covering "Groove Is In The Heart"

Amanda Ashley Covering "These Boots Are Made For Walkin'"