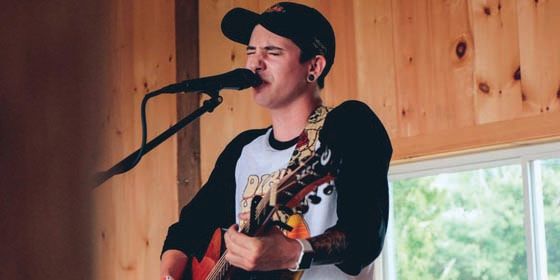 Brody Wingate is a musician from the suburbs of Baltimore, Maryland who found his love for music in an unconventional way.  Although he found himself playing drums whenever music was in the air and he had anything resembling drumsticks, never owning an instrument of his own until early high school made the struggle of trying to find his place in music a real challenge.  Once he got his guitar, his life changed forever.  Music became his focal point as he skipped mundane homework assignments to practice his craft, often working tirelessly until the early morning hours to learn as many songs as possible.  Brody knew early on that he wanted to have a stylistically diverse repertoire and certainly didn't want to limit his sound to only one genre of music.  He researched decades worth of Billboard charts and began covering any song that tickled his fancy while adding his own distinctive touch.

After meticulously refining his sound, Brody began performing at local open mic nights in 2015.  It didn't take long until he was provided opportunities to perform as a reputable solo artist.  Since then, his performances have evolved from "a guy and a guitar" to a "one-man-band" style.  With the help of a few loop pedals and a vocal harmonizer, Brody offers a much fuller sound than your typical solo musician.  During his live performances one can expect to hear songs that appeal to nearly any demographic.  He covers everything from Rick Astley and Twenty One Pilots to Michael Jackson and Ed Sheeran.  Catch him live and rest assured that you'll recognize and enjoy more than a few tunes from his constantly evolving arsenal of music!