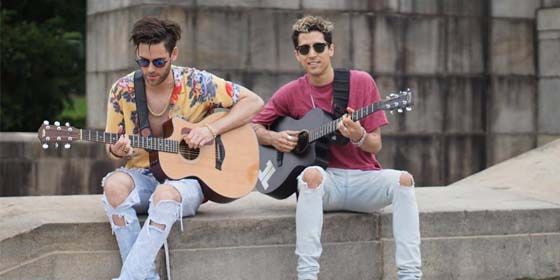 Originally solo artists, Dom & Jesse joined talents early 2018 to create the Pop/Singer-Songwriter duo you see today. Dom, from Connecticut and Jesse, from Florida, met and came together in Philadelphia, PA, which is where they live currently.

Dom (Dominic Tursi) was originally born in Florida, alongside a twin sister and older brother, but at the age of four moved to Tolland, Connecticut. At a young age and as a left handed person, Dom learned to play a right handed guitar upside down, an anomaly amongst musicians. Dom is a lover of high fashion, extreme sports, and a graduate of UArts College.

Jesse (Jesse Lopez) was born and raised in West Palm Beach, FL to a single mother and 2 brothers. At the age of 12 Jesse learned to play the drums and went on to join his church band. At 13 he learned to play guitar from watching YouTube videos. Jesse has played close to 1,000 shows throughout his young life, including tours across the USA and a festival in China. Off stage, he enjoys surfing, spending time with his son, and being a big kid.

Dom & Jesse Covering "Shape of You"

Dom & Jesse Covering "In My Blood" & "Use Somebody"