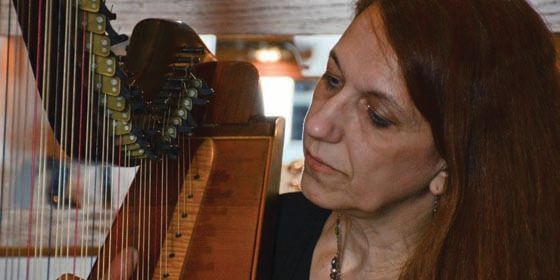 Ellen Tepper, harpist and historian, brings life to 500 years of harp music.  Ellen was born in New York but spent most of her childhood in Vienna, Austria, where she began studying classical harp at the age of eight.  Her abiding interest in early music was inspired by a childhood spent exploring ruins in Europe and by her exposure to the multi-faceted cultural life of Vienna.  After returning to the United States, she continued her studies to earn a degree in Harp Performance from the Philadelphia College of Performing Arts (now The University of the Arts).

A versatile performer, Ellen has performed the traditional pedal harp repertoire but now focuses primarily on music composed before 1800, playing it on a variety of harps, including the medieval harp, the Irish wire strung harp, the Italian triple harp, the Renaissance bray harp, and the modern “Celtic” or lever harp.  Ellen has performed with the Historical Harp Society, the American Harp Society, Early Music at the University of Pennsylvania, and with the iconic Philadelphia early music ensemble Piffarro.  She also performs for “Music for All Seasons," and frequently appears as a soloist in the historic homes of the Delaware Valley.

As an authority on the early harp, Ellen is in demand as a lecturer and performer.  Known for her humorous approach to historical anecdote, her “History of the Harp through Iconography” show is both educational and entertaining.  She has served on the Board of Trustees of the Historical Harp Society, and has conducted workshops in English Country Dance Music for the International Society of Folk Harpers and Craftsmen.  Entering the world of the Irish harp through historical sources rather than folk tradition, she has produced five recordings of traditional music.  Her repertoire ranges from the 13th to 18th centuries, and includes the well-known music collected by Edward Bunting in Belfast in 1792 at the gathering of the last of the Irish minstrel harpers.

Ellen's publications include Eight English Country Dances, The Harper's Accomplice, Four Variations on Auld Lang Syne, Drewries Accordes (a transcription for harp ensemble), and two chorales by Bach arranged for harp ensemble.  She has recorded with the Voices for Children Foundation, a volunteer choir of opera singers which raises funds for pediatric AIDS and numerous other Philadelphia-area musical groups.  Her publications are available from Melody Music.

Ellen conducts workshops and classes in harp performance and arranging at her studio in Glenside, Pennsylvania.  She has served as a faculty member for Early Music Week at Pinewoods, teaching harp.  She now has five recordings to offer: Timeless Music for the Celtic Harp, Celtic Refractions, Waltzes with Harps, The Space Between the Strings, and her newly released Winter Cycles.  Ellen has also appeared on MiND TV (local channel 35 in the Philadelphia area) and on their website.

"Ellen Tepper is one seriously talented woman.  She is a phenomenal Celtic harpist, a witty historian/lecturer, a skillful arranger, an outstanding performer, AND a skilled artisan...  Tepper's precise style is clean and light, and the excellent production values here make every note shimmer."

"Ellen is an absolutely stunning harper who creates true magic with the neo-Celtic harp... gifted with a sense that allows the expression of musical wonder.....She weaves spell binding music with effortless grace"