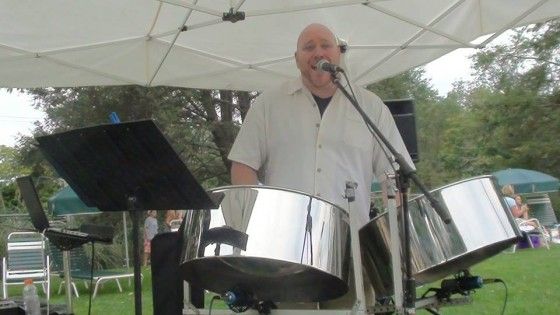 A native to the city of Philadelphia, vocalist and steel drummer Michael Carsley is no stranger to the music scene.  On June 7th, 2009 Michael's newly purchased set of double second steel pans had arrived back from the chroming company.  Pan maker and musician Kyle Dunleavy had only needed to tune the pans before Carsley came running to pick up his new babies.  One week later he was playing his first gig in Burlington NJ.  Cort Farris had a five piece band that day which allowed Carsley to bring his new double seconds while another musician filled in on the bass guitar for a set.  One month later he had already played his first four hour solo gig at a seafood restaurant in Belmar NJ.  Carsley was triggering a drum machine with pre-programmed bass lines while he played steel pan and sang songs simultaneously.