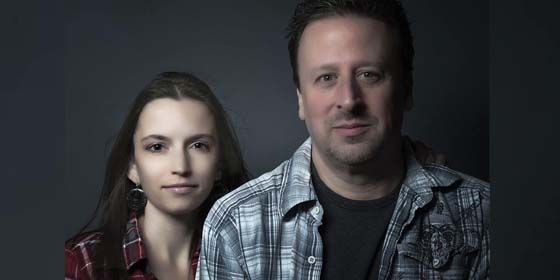 Mo7s is the duo of Reading, PA based musicians Dave and Amy Lewis.  The songwriting pair's musical roots are steeped in the music of the '50's and '60's, with a sound culling from early Rock & Roll, Rockabilly, and a touch of Country/Americana, all performed with a decidedly modern twist.  That being said, there isn't a musical style or genre they're afraid to dabble in.  "They are very chameleon-like, and I think that's partly to do with the amazing musical background of Dave Lewis," said Dave Kline (Reading Eagle).

Lewis's straightforward Rock & Roll approach to the guitar is one of the driving forces of Mo7s.  His seemingly effortless playing is infused with a raw, bluesy style that makes a strong musical statement.  Amy's heartfelt alto, with its very distinctive, rich, smoky tone is another key component to the Mo7s sound.  The powerful voice coming out of her petite frame routinely catches audiences pleasantly off guard.  For Mo7s, "there's an undeniable musical chemistry that starts with their vocals” (Reading Eagle).  The couple, who married in June of 2017 but have worked together musically since 2012, make tight, seamless vocal harmonies an integral part of their sound.

A departure from the eclectic, experimental nature of the 2014 release "Hate Mail From A Love Child", the 2016 album "Gift Horse" features a more defined, focused sound for Mo7s.  This '50's Sun Records inspired recording reflects more of the sound that they have crafted over the previous couple of years of performing and utilizes their live backing band to produce an all original ten song album.  From the rocking opener "Next To You" to the searching balladry of the closing track "State Of Mind", the album features the soulful vocals, crisp harmonies, and bluesy guitar work that make up the Mo7s signature sound.

Going beyond the studio, Mo7s has been strengthening their reputation for solid live performances as well.  "It really says something when just two musicians and their guitars can have such a commanding onstage presence" (Lehigh Valley Underground).  Frequently taking an intimate, almost "Storytellers" type approach to performing, Mo7s keeps audiences engaged with their music, feeding off of the crowd and tailoring the show to the energy of the room.  Performing both as a guitar/vocal duo and as a four piece band with drums and bass, Mo7s are just as at home playing at a small brewhouse as they are on a festival stage.  For Mo7s, the future lies in continuing to write and record new material, giving live performances to support their catalog, and expanding their reach into new markets and venues.