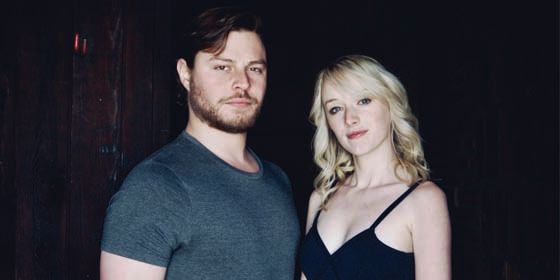 Together, Nicole Zell & Chris Spousta form a one-of-a-kind duo act.  Consisting of Nicole on vocals and guitar accompanied by Chris on his handmade vintage suitcase drum kit, these two artists have developed a unique, timeless sound that is entirely their own.

Born into a musical family, Nicole Zell has been pursuing a career in music for over a decade.  Nicole has established herself for over a decade as a successful solo artist, former guitarist for alternative rock band, American Wolves, and current lead singer for alternative pop band, THRILLCHASER.  In 2014, Nicole released EP, Take Heart, followed by 2016 single, "Heart Open Wide", which premiered on Fuse TV. Nicole's former band, American Wolves, made their debut on the alt rock scene in 2016, premiering their single "Part of Me" on Billboard - which has now reached over a million plays on Spotify.  American Wolves went on to tour with Escape the Fate and were featured on numerous press outlets such as Alternative Press, MySpace, iHeart Radio's Dunkin' Donuts Iced Coffee Lounge, MLB, and more.  In 2017, Nicole and her bandmates formed alt pop band, THRILLCHASER - which is how Nicole & Chris eventually came to meet.  THRILLCHASER released their debut album in early 2018 followed by a single in mid 2018.  The band spent 2019 recording their sophomore album which is greatly anticipated to be released in 2020.

Born partially deaf, Massachusetts native Chris Spousta never allowed that adversity to thwart his aspiration to pursue a musical career.  Chris grew up in school playing all thirteen orchestral instruments and their scales, eventually going on to play in state superior ranked East Ridge High School jazz band in Florida.  He performed in numerous bands such as hardcore metal band, Far From Truth, which toured three years in a row on Warped Tour during 2008-2010.  Later, Chris studied music theory at a local community college before attending Berklee College of Music in Boston, MA for conducting and composing.  In 2017, he joined THRILLCHASER as the official drummer.

Aside from their band, THRILLCHASER, Nicole & Chris make music as a duo based in the greater Philadelphia area.  Performing hundreds of shows per year, they have an extensive repertoire of original and cover material which complements any setting.  Their roster includes renown venues such as the Hard Rock Cafe (Philadelphia, PA), Xfinity Live! (Philadelphia, PA), Love Park (Philadelphia, PA) and Live Nation's The Queen (Wilmington, DE).  Nicole Zell and Chris Spousta create a captivating live experience that is undeniably unforgettable.