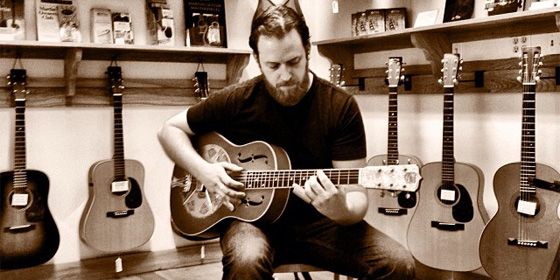 Born in Williamsport, PA, music was a part of Farley’s life at a very early age.  Now his love for guitar has come full circle with a certification in Lutherie (the crafting of stringed instruments).  Farley now plays guitars that he has crafted by hand.

Farley has made it into the International Blues Challenge three times, taken the stage at the Billtown Blues Festival seven times, and has opened for bands like “Yes” and “Blue Oyster Cult.” He has shared the stage on several tours as a lead guitar player for the “Georgia Song Bird” E.G. Kight, recorded on her album “It’s Hot In Here,” and is still her main guitarist in the North East.  He has performed with other musicians like Ann Rabson, Bnois King, Smokin’ Joe Kubek, “Iron Man” Michael Burks, 2013 Grammy nominee Melissa Reaves, and more.  Farley currently occupies the role of guitarist, singer, and songwriter for regional acts including Black~n~Blues and Lynn & Farley 5.

Farley's dedication to life as a musician was thoroughly tested by a near tragic accident with a machete knife!  The night before a New Year's Eve gig, w/ Kight and her northern band, he accidentally cut through most of his left thumb, including tendons, ligaments, artery, nerves, and bone joint.  He had immediate re-constructive plastic surgery on new year's morning and began the road to recovery.  Farley had just over a month till his second Memphis IBC opportunity, to heal and learn to play guitar without the use of his thumb. While in cast he learned to play slide on his lap, out of pure frustration and longing to play guitar again.  He played as well as possible on Beale Street, and then received 6 months of occupational therapy.  He was deeply reminded of his love for the guitar through this process and has mostly recovered since.

Since moving back from Arizona, where Farley pursued his education in the art of guitar making, a new chapter in his musical endeavors has taken form in solo performance.  Farley has been spending most of his time on his hand made acoustic guitar and chasing fuller sound with LIVE “looping.” This “looping” allows Farley to be a rhythm guitarist, a percussionist, and a lead guitarist, all at once.  At his solo shows you will hear what sounds like multiple guitarists, a rhythm section, blistering leads, and a powerful soulful voice.

Farley will forever be primarily a Blues player, but has been influenced by many other musical styles like Funk, Rock, Soul, R&B, Reggae, Americana, Country, and Jazz.  All of these influences can be heard throughout his songwriting and performances.  He most recently released his first solo album titled "Karma."

In January/February of 2013, Farley returned to Memphis to test his new solo show, healed hand, and custom guitars at the 2013 IBCs!  He then continued southwest to do his first cross country tour in Colorado, New Mexico, and Arizona with the help of iAM Independent Artist Management!

Sean Farley Covering "Good Love Is On The Way"

Sean Farley Covering "Take On Me"

Sean Farley Covering "Everyday I Have The Blues"